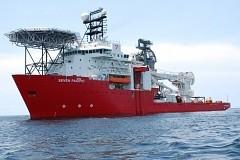 Croon Marine & Offshore was the electrical system integrator and installation contractor for this new build project at IHC Merwede. The Seven Pacific is a vessel with high-end technology. Building a vessel of this kind requires technological knowhow and experience in building such a complex vessel. The Seven Pacific is a multi-purpose offshore support vessel which meets the highest standards and latest regulations. The vessel was designed for the exchangeable service of pipe storage systems and pipelaying systems all over the world. The primary focus is the flexible pipes, which can be stored and transferred in different ways, five reels on the main deck or two large carousels below the main deck.

IHC Krimpen Yard
The Seven Pacific was built at the IHC Merwede yard in the Netherlands as a sister to the Seven Oceans, Seven Seas and Seven Atlantic, all commissioned by SURF contractor Subsea 7.