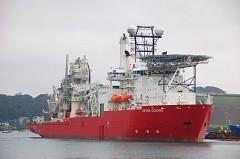 Croon Marine & Offshore was the electrical system integrator and installation contractor for this new build project at IHC Merwede. The Seven Oceans is a vessel with high-end technology. Building a vessel of this kind requires technological knowhow and experience in building such a complex vessel. The tasks of the Seven Oceans are deepwater rigid reeled pipe lay and construction work. The vessel is also capable of flexlay and was specifically designed for the Atlantic Triangle, comprising West Africa, Brazil and the US Gulf. The Seven Oceans was built at the IHC Merwede yard in the Netherlands as a sister to the Seven Pacific, Seven Seas and Seven Atlantic, all commissioned by SURF contractor Subsea 7.