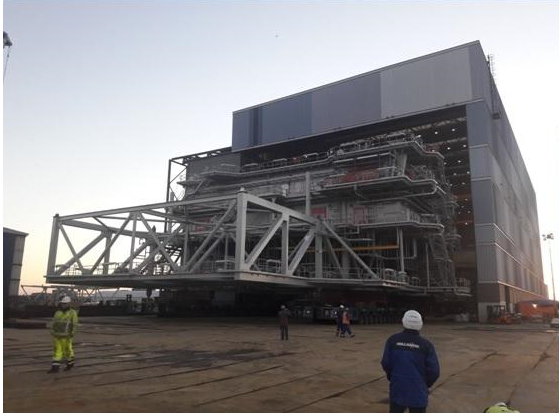 Hollandia Offshore and Croonwolter&dros have moved the Kriegers Flak B (KFB) offshore substation topside from Hollandia Offshore’s production hall in Krimpen aan den IJssel and into the yard.

The Kriegers Flak A (KFA) topside is scheduled to be rolled out into the yard on Thursday, 23 November, with Sarens managing the site moves. The topsides will remain at the yard’s assembly square for outfitting until the load-out early spring next year, Holandia Offshore said. The Kriegers Flak substations will be installed on Vattenfall’s 600MW Kriegers Flak wind farm in the Danish sector of the Baltic Sea. The wind farm consists of two sections, each with its own substation.

KFA will be installed in the west section of the wind farm and will have a total capacity of 200MW. The east section, KFB, will have a total capacity of 400MW. KFB substation will also serve as the support for the KFE module and be part of the so called Combined Grid Solution project run by Denmark’s Energinet and the German transmission systems operator 50 Hertz. The Combined Grid Solution will interconnect the Danish and German grid via two offshore wind farms, Kriegers Flak and Germany’s 288MW Baltic 2.

On May 31st 2016, Hollandia Offshore B.V. and Energinet.dk, the Danish Transmission System Operator, signed the contract for the engineering, procurement and commissioning of the Kriegers Flak substations. The project consists of two unmanned substations which are due for delivery April 2018. The commissioning will take place in April and May of 2018. On June 1st 2016 Croonwolter&dros and Hollandia Offshore B.V. signed the contract for the design, procurement and installation of the utility systems for the Kriegers Flak substations.